Unlike a lot of contractors I’m not a big fan of what’s known in the trades as "bending rail" at all and I prefer to use material that’s solid or horizontally laminated and then formed using what is known as the Tangental Railing Technique. It’s more difficult in that it requires a solid understanding of the complex trigonometry involved but the results are not only more attractive but the installations are also trouble free over time.

Bending rail is a type of commercially available railing that is essentially a standard railing profile that’s been band-sawn into vertical strips about 3/8" to 1/2" thick which you then apply glue to, bend to the desired curve, clamp, let it set up, sand and finish. One of the first railing projects I ever did over fifteen years ago was with bending rail and over the course of the next three to five years I kept on having to go back to re-plumb the newel at the base of the staircase. You see the bending rail has a little bit of "memory" so to speak and was trying to return to it’s straight rail former self. It is also and perhaps more importantly not very attractive. As you can see in the photo on the left the cherry bending rail on the left doesn’t look nearly as attractive as the solid horizontalilly laminated mahogany railing on the right.

As a result of these considerations I haven’t used it since then.

Another one my other complaints with bending rail is it comes in a limited number of profiles and making your own is not as just as simple as bandsaw-bend-glue-sand-install. Certain profiles (and species) don’t lend themselves well at all to that technique. I also feel that in certain wood species it would be a waste of wood "design-wise" too. While bending rail doesn’t look all that bad in straight grained oak I would think in figured cherry bending rail wouldn’t look anything at all like it was cherry.

As I mentioned earlier I prefer horizontially laminated ( or as we call them "blanked" up or "stacked") rail or rail made from solid stock. The photographs above and to the left show project we completed in the spring of 2000. On this project all of the railing was fabricated (cut and shaped) from solid stock. The level S-shaped section in the first section was cut from a 3" thick piece of cherry about 14" wide by about 9′ long and the curves in the second photo were cut from pieces that were maybe 10" or 12" wide by about 14′ long. The very last part of the curve in the second photo where it returns to the wall is short curved piece that I added on otherwise to make that whole section out of one piece we would have had to had a 3" thick piece of cherry about 18" wide by 15 or 16 feet. (You should be able to click on the pictures and thumbnails here and open up a larger photograph in it’s own window.)

The way the whole job went I first templated the whole balcony and gave thetemplates to the iron workers (Bedford Ironworks, Bedford NY). They then fabricated the iron balustrade sections and installed them. Then working from the templates

we then fabricated the bullnosed base pieces that "clam-shelled" around the balustrade on the floor level (photo right).

The carpeting that would be intalled at a later date would run up to and butt with the bullnosed flooring pieces we were installing. While the straight sections of the floor pieces
weren’t that difficult getting the two curved floor pieces to mate perfectly with each other while tightly encasing the balusters was actually the toughest part of the project.

As it turned out you could fabricate and fit only about four or five linear feet of the curved "clamshell" flooring sections a day. I origonally figured (estimated) the curved floor sections would be four or five times as difficult as the straight sections. As it turns out they were more like twenty times the difficulty . The sections were biscutted and joined with polyurethane glue together. I found a great new tool in a Metabo 3" Random Orbit Sander to clean up the joints along with the trusty old Fien finishing sander too.

To fabricate the railing we actually placed the stock (after surface planning it to thickness) on top of the installed balustrade and scribed/traced both side of the 1" wide strap iron that held the top of the balustrade together. The stock was then flipped and the plough for the strap iron routed out. We then took the pieces out to the garage with had a perfectly level tile floor and set them up on a high set of saw horses. We then scribed the rail pattern using the plough as a guide. The stock was then cut along those lines with a band saw I had mounted on wheels. In other words the bandsaw moved while
the stock stayed in one place. I tried it the other way at first but the pieces were way too cumbersome to handle and kept binding because they didn’t move laterally side to side across the saw horses. I could have use ball bearing type rollers I guess but I found this was just as easy to set up at the time and I think after the fact that it’s the better method in terms of the ease of cutting through such large pieces of wood.

The rough curved railing shape was then "faired" sanding it with
a belt sander. I found this was real important to do before shaping because any bump or hump in the band saw cut will transfer itself to the shaped cut and it a lot easier to "fair" the surface while it’s flat than after it has a complex curved shape cut in to it. You can ask the guys who sanded the shapes I did with out that "fairing" step. The profile was shaped using a 3-1/4" Porter-Cable Router with a 1" round over on the top and a "railing" bit that I picked up from Rockler (why they are the only ones who make that shape in a router bit puzzles me)

Before installing the rail back on the balustrade we took 1/4" thick
cherry stock and clamped it to the strap iron and then using a trimmer bit trimmed it off in place for use as fillets in the ploughs and then installed the railing on the balustrade.

The tricky part of the job and what turned away a lot of other stairbuilders was the wreath turn on the stair (photos below). As you can see from the photo below both the bottom section which we referred to as the parapet cap and the rail had to make a 180 degree turn while decending approximately 30" on a very tight radius. I think the railing centerline turned on a 4-1/2 radius. That made the inside radius of the parapet cap wreath’s turn a 1/2 in radius.

You
can see from the second photo there that it almost turns "under itself".

The way I made the turns was after plotting them out in my head and then checking my thinking a couple of times with drawings in VectorWorks I glued up a blank for the parapet cap wreath stacking a 3" blocks of cherry and then roughed out the rail according to my calculating from one of the 4" plus thick x 12" blocks I had around. You can’t use 3" since the base plane of the rail distorts itself as it makes the helical turn so you need enough extra stock to accommodate the distortion. (Distortion is actually the wrong word since it’s geometrically doing what it is supposed to be doing but the word helps explain what’s happening. The shaping of the railing was pretty much sculpting with a carbide bur chucked in a Roto Zip tool and then touched up and finished with sanding drums in a dremel and that 3" Metabo I mentioned earlier.

The parapet wreath was roughed with a Porter-Cable Tiger Saw and 40 60 and 80 grit sanding disks in on a 4-1/2" DeWalt Grinder and then finished with the Metabo as well as a 5" Porter Cable Random Orbit Sander.

To look at more pictures of the whole project and other interesting stair projects you can click to visit the Stairscapes.com website. 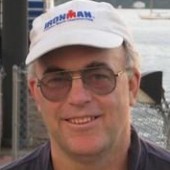